Having reached its first decade of existence, it is a good time to review some of the achievements of the Global Soil Partnership. Moreover, time to pay attention to the lacks of the Member States' CAP Strategic Plans regarding the climate crisis and biodiversity conservation. On the brighter side, organic agriculture is being given a push by the European Parliament.

The Global Soil Partnership has been working to raise global and local awareness of the importance of sustainable soil management and guide policies to face issues ranging from erosion, salinization, and pollution to biodiversity conservation, carbon sequestration, and nutrient imbalances. To guarantee food security for all, it is important to conserve soil fertility and encourage the transformation of agrifood systems to be more efficient, inclusive, resilient and sustainable. The Director-General said that the aim is to improve and maintain the health of at least 50 per cent of the world’s soils by 2030, meaning that they have "the ability to sustain the productivity, diversity and environmental services of terrestrial ecosystems." The current situation shows that one-third of the world’s soils today are in poor or very poor condition and suffer from degradation processes.

The 10-year celebration of the partnership was marked by the launch of the Global Black Soil Distribution Map — with a country-driven approach. Black soils feed people all around the world despite it representing a small proportion of the world’s soils. You can check the map here.

Ten years of history have allowed collecting over 300 publications and infographics in more than 30 languages, over 7000 national experts trained in 170 countries, more than 4000 events organised, and over 30 000 people involved in technical webinars. Since the establishment of the Global Soil Partnership, in 2012, a lot has been happening and many achievements should be mentioned, such as FAO Soils Portal as a main source of information, international technical networks, awareness-raising, key publications and maps (e.g. Status of World’s Soils Report, World Soil Charter, Voluntary Guidelines for Sustainable Soil Management, International Code of Conduct for the sustainable use and management of fertilisers, State of knowledge of soil biodiversity, Global Assessment of Soil Pollution, a manual for Recarbonizing global soils). The whole timeline of sustainable soil management in action can be found here.

To have a look at the main achievements of the Global Soil Partnership, go to this site.

A new assessment released by Birdlife Europe and the European Environmental Bureau has found that EU Member States are failing to use the Common Agricultural Policy (CAP) funds to address environmental degradation from intensive agriculture practices. This comes at a time when Member States are putting the final touch on their CAP strategic plans before their submission for approval by the European Commission.

In two new briefings on soil and grasslands conservation, national agricultural experts at Birdlife and the EEB analysed how eight and eleven EU Member States planned to use CAP funds to protect and manage grasslands and to ensure and safeguard soil health on EU farms, respectively. The briefings found that they insufficiently do so. CAP plans for 2023-2027 fail to adequately protect and sustainably manage valuable grasslands and show too little ambition to safeguard EU soils. The findings are at odds with the EU Green Deal’s ambitions for its Farm to Fork and Biodiversity Strategies. This complements findings of previous Birdlife and EEB briefings that find the draft CAP strategic plans are unlikely to reach the 10 % biodiversity target set by the EU Biodiversity Strategy. The plans fail to sufficiently protect wetlands and peatlands and thereby safeguard the preservation of carbon-rich soils.

Clearly, there is room for improvement. The European Commission has sent out its Observation Letters to the Member States pointing out gaps and calling for higher environmental and climate ambitions. Environmental ambitions set by the European Green Deal are integral to addressing biodiversity loss and climate change. However, these targets cannot be met if the current draft CAP plans that hurt the environment are approved. The series of thematic briefings published by Birdlife Europe and the EEB confirm that the European Commission must push for stronger CAP strategic plans that align with the Green Deal targets.

CEEweb’s Policy Expert on Agriculture, Orsolya Nyárai, contributed to the assessment of soil health with critical insights on Hungary’s proposed CAP Strategic Plan. The assessment finds that draft CAP Strategic Plans fail to sufficiently protect EU soils and thereby fail to prevent further soil degradation and loss of soil organic matter. The conditionality requirements relevant to soils (GAEC 5, 6 and 7) are implemented too weakly by the Member States to reduce soil threats and slow down soil degradation.

Further briefings on the new CAP include the assessment of grasslands, space for nature on farms, and peatlands and wetlands.

Organic Production is Prioritised by the European Parliament 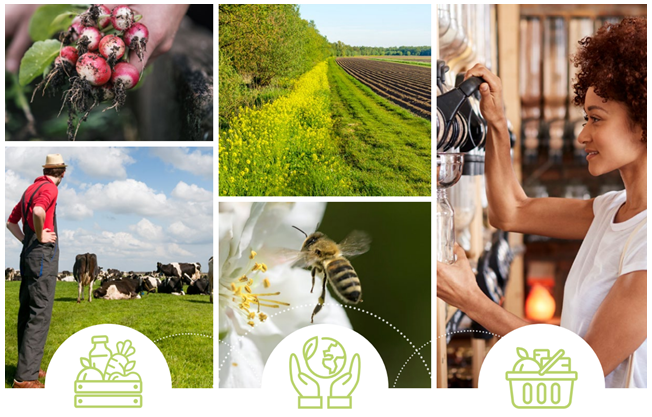 Political support for the EU Action Plan for the Development of Organic Production has been further strengthened by a recent resolution adopted by the European Parliament that places particular attention on promoting national approaches, supply chains, and research as key to the growth of organic agriculture through CAP Strategic Plans (CSPs).

The MEP and rapporteur for the resolution, Simone Schmiedtbauer, summarised her colleagues' endorsement of organic agri-food systems: "With the EU Organic Action Plan, we make sure that there is a good mix of the right instruments, incentives and sufficient flexibility so that each EU country has tailor-made opportunities to further develop its organic sector individually and bring the European organic vision into its own national or regional organic strategies. Ultimately, the expansion of organics is not only about climate, environment, and animal welfare but also about economic efficiency for our farmers."

Read more from the European Parliament on this topic about market-driven and supported organic farming, the role of supply chains and public procurement, as well as research and innovation to sustain the organic farming sector.

Get Moving for Nature!

CEEweb's Resilience Analysis Framework is out!