Game On! opened its over-layering of the permanent exhibition of the Tokaj Museum, in Hungary: a set of exhibits documenting the impact of climate change on Tokaj’s famous wine production.


Sipping at the sweetness of a fine 2017 Tokaji Szamorodni, it could be easy to forget that the final successful harvest of its trademark grapes may be just years away. The flourishing tradition of Tokaj’s wine industry, one of Hungary’s most storied cultural exports, is intimately linked to the region’s environmental conditions, and changes already being faced by local producers threaten the future viability of its grape varieties.

With the gracious partnership of the Tokaj Museum and the Tokaj World Heritage Wine Museum, and through the ‘gamified’ framework of the Game On! Project, CEEweb has established a number of exhibits reflecting the threat of climate change to the local wine industry. As part of Game On!’s wider project of ‘overlayering’ cultural museums in Central and Eastern Europe to account for the relevance of climate change, these exhibits placed the future of climate change in the context of the museum’s history of Tokaj’s wine industry. Particularly highlighting the precarious position of the region’s foremost native grape variety, the Furmint, the exhibit notes the disruption that unpredictable weather patterns and sustained periods of drought will cause to the very particular natural processes that make Tokaji wine unique. Most notably, Tokaj’s sweet wines, the most traditional, depend on the Aszú production process, harvesting berries at the end of the harvest season. These shrivelled berries, partially decomposed by noble rot, are central to the full-bodied sweetness of the region’s world-famous Szamorodni and Aszúesszencia wines. Sustained drought means that grapes must be harvested earlier in the season, preventing their full maturation, while excess heat alters acid composition, resulting in an altogether different product. 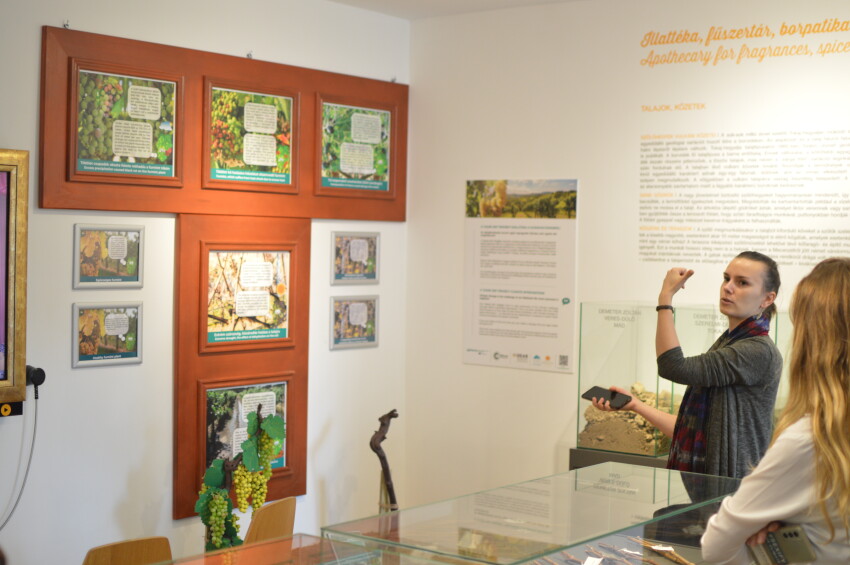 CEEweb’s Eszter Sebestyén talks through the contents of the first Game On! exhibit in the Tokaj World Heritage Wine Museum. The exhibit details the processes by which climate change disrupts the growth of the Furmint grape, and its partial decomposition by noble rot for the Aszú.

This process of loss was presented to a variety of stakeholders in a direct sensory fashion, during a traditional gathering of the regional mayors, at which CEEweb was graciously invited by the museum to announce the new exhibits. On October 1st, the first of the historic Harvest Days celebrations in Tokaj, CEEweb officially opened the exhibition during its attendance at a ceremony involving the mayors of all the Tokaji villages, representatives from CEEweb, museum directors, and with the notable presence of the Hungarian Minister of Agriculture, Dr István Nagy.

Through a specially-curated wine-tasting session, two local producers presented the impact of climate change in flavour terms: first delivering a sweet Szamorodni of clear quality with a deeply complex profile, then a dry, light variant with a far more limited flavour profile. This direct contradiction of the standard dry-to-sweet rules of a wine tasting session was no mistake, but rather designed to reflect the ever-increasing likelihood that the sweet wines which set Tokaj apart throughout history may soon be relegated to memory by climate change. Narrating this loss through the harshness of a transition from a sweet wine to a dry variety was an apt move for the Tokaji producers. By doing so at such an event attended by local and national representatives, this was an opportunity to platform the concerns of those on the front lines of climate impacts to an audience of political weight, establishing connections for the development of climate action. Indeed, the two producers at the event gave speeches to address their concerns about climate change, including the changes and losses to their harvests they had experienced over this year’s particularly severe summer heatwaves.

Dr István Nagy, the Hungarian Minister for Agriculture, visits the wine-tasting ceremony which formally opened the exhibitions. Upstairs in the Tokaj Museum, political representatives from the region’s settlements gathered to hear local producers explain the impact climate change was having on their outputs.

Though this might seem somewhat mundane as the effects of climate change go, the cultural legend of the sweet Tokaji Szamorodni and Aszú should not be underestimated. The favoured elixir in palaces across Europe in the 17th century, it is said Tokaji wines were a key diplomatic tool of the revolutionary Prince Rákóczi, a central figure of Hungarian national lore. Legend also holds that an offering of wines from the region spared its villages from attack by Polish soldiers returning from the famous defence of Vienna against Ottoman siege in 1683. Reflecting this rich position in local and national folklore, the Tokaj-Hegyalia wine region is today designated a UNESCO World Heritage Site, and the Tokaji wines are a forefrontal part of a vibrant contemporary Hungarian culinary culture. Their flavour connects the elites of Austro-Hungarian courts, the kings who laid down arms in exchange for it, and thousands of present-day Europeans from across the continent visiting Tokaj-Hegyalia on summer wine-tasting excursions. With the loss of the Furmint, the lifeblood of the Szamorodni, the Aszú, we lose not just a unique decadence, but a taste colouring a grand historical timeline.

The CEEweb-led over-layering of the Tokaj museums thus comes as a timely addition to the story of this region and its wines. While perhaps not the typical remit of a climate awareness project, involving local producers in telling the impact of climate change as part of a longer history is representative of a move to contextualise and broaden the scope of our audience as environmentalists. It reminds us that the cultural heritage that we celebrate is so often forged in relationship with the gifts of nature, and that our exploitation of that relationship risks damaging the very things that make our communities special. For Tokaj’s glorious living wine culture, this is perhaps the most pivotal moment yet in its history.